The two-storey building, located just opposite the “lodge”, next to the Sanctuary of Mary Help of Christians, is the home of Brother Giuseppe. Giuseppe, Don Bosco’s brother, married at twenty, and here he built his home. A first floor room was reserved for Don Bosco. A ground floor room was then donated to a chapel, blessed by Don Bosco in October 1848. The barn and barn became an autumn dormitory for the Oratory boys who spent a short vacation with Don Bosco in harvest time; They celebrated the “Madonna del Rosario” and then left for the famous autumn walks. Here was a sundial with the inscription that marked the years of study of the cleric Bosco: “Afflictis lentae – celeres gaudentibus horae”, or “The hours pass slowly for those who are sad, fast for those who are in joy.” 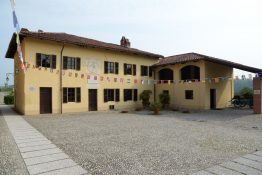 The Don Bosco Basilica is the first place in the world to show pilgrims Via Lucis, an original passage made by sculptures of Easter devotion that remembers and celebrates the events of Christ’s life from the resurrection of Jesus to Pentecost. 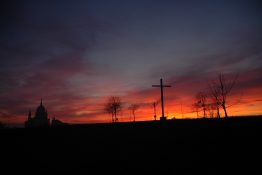 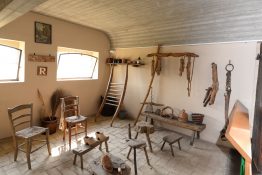 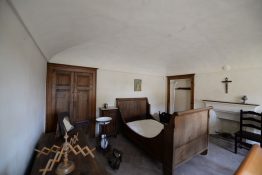 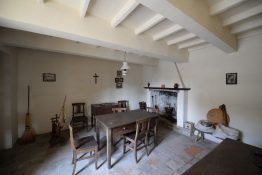 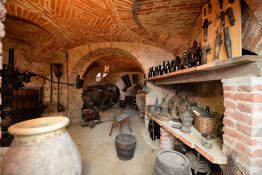 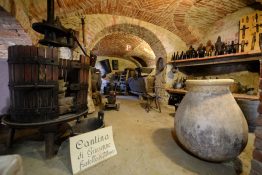 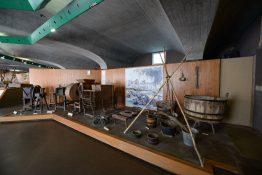 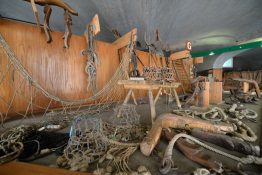 Museum of Rural Civilization of the Nineteenth century

Built beside the house of Brother Giuseppe, the Museum of Rural Civilization illustrates 19th century farm family’s life, living on the Monferrines and piedmontese hills.
Everyday life is conditioned by the cultural and natural environment, where everyone has spent the years of childhood and adolescence. So it was for Giovanni Bosco, immersed in the rural mentality, made of deep familiar sense, of much work, of hard sacrifice, of extreme poverty and of strong Christian faith. The objects and photographs of the Museum testify this lifestyle and values that Don Bosco’s Missionaries have brought in the world.

Sanctuary of Mary Help of Christians

Originally, this place was occupied by the tiny house of Antonio Bosco, then destined (1915-17) to the Sanctuary of Mary Help of Christians.
It was an initiative of the Salesian Cooperators, who wanted to remember two centuries: the establishment of the Feast of Mary Help of Christ by Pope Pius VII (24 May 1815) and the centenary of Don Bosco’s birth. Many people coming from the whole world contributed to the construction of the sanctuary: the coats of arms running under the roof reminds all their nations. The project was made by Salesian architect Giulio Valotti. The statue of Mary Help of Christians is the work of Salesian Professional Schools in Barcelona (Spain). Today is a place of worship and daily prayer for the youth and the Salesian Family in the world. 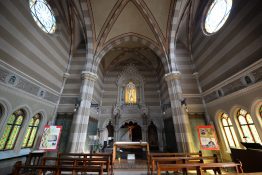 This Museum shows the missionary dimension of the 9-year-old dream: Don Bosco, father and master of the youth in the world.
Started in 1875, Don Bosco’s Salesian Missionary Adventure now reaches over 130 nations. The Museum presents the missionary work of the sons of Don Bosco and the encounter with unknown cultures. Here can be seen significant findings of material, family, work, religious and social life.
The luminous panels remember some great Don Bosco’s missionaries, and the human promotion and evangelization action carried out in mission territories.
To find out more, visit www.museocolledonbosco.it and Facebook on “Museo missionario”

On the eve of the Beatification of Don Bosco (June 2, 1929), his third successor, Don Filippo Rinaldi, bought the “Cascina Biglione” and the lands around. Here, Don Pietro Ricaldone built, from 1938 to 1940, a large institute for young orphans and poor people eager to give their lives to the education of other boys.
In the Institute was opened a Graduation School for the spread of good press, in support of the catechistic campaign (launched in 1942). Numerous Salesian coadjutors were formed at that school, and then they left as missionaries in many parts of the world.
The Institute carries the name of its benefactor, the lawyer, Pietro Bernardi, and his grandson, Father Semeria.
At present, in the Institute lives and works the Salesian Community of the “Colle” which welcomes pilgrims, tourists, youth groups and hosts a Professional Center for Graphic Arts. Additionally, it provides a valuable support to the parishes of the area. 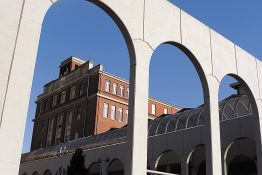 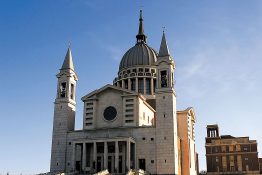 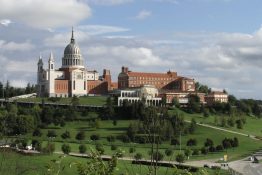 Cross on the hill of the Young Beatitudes

The definition of “Cross of Youth Beatitudes” comes directly from a speech given by Pope John Paul II during his visit to Colle Don Bosco on September 3, 1988. The Pope referred in general to all the hills that characterized the childhood of San Giovanni Bosco. The cross remembers the last missionary dream that took place between 9 and 10 April 1886 while Don Bosco was in Barcelona. 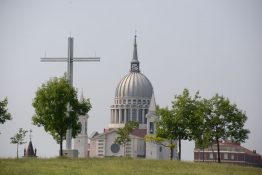 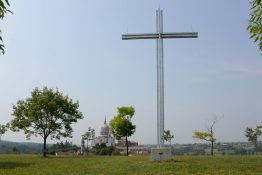 Starting from the lodge of Giovanni Bosco and continuing along the road leading to the house of Domenico Savio you will find a path enriched by 14 pilons that tell the lives of many young people present in the Bible. 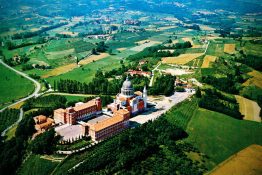 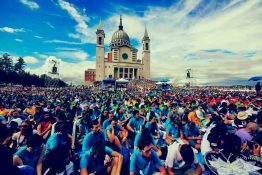 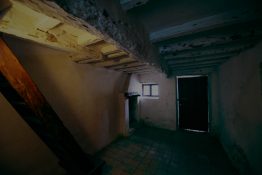 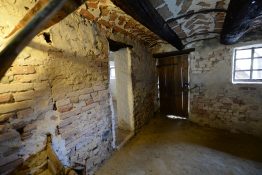 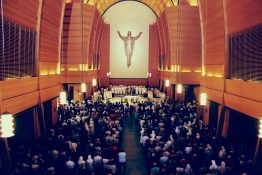 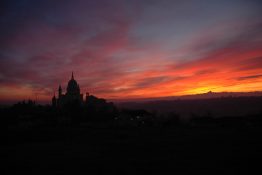 The Basilica of Don Bosco

The Basilica of Don Bosco was built where the Biglione Farmstead once stood. Don Bosco’s father was a share farmer there. In that part of the house where the Bosco family lived, John Bosco was born on 16th August 1815. His father Francis died when John was but two years of age. Mamma Margaret transferred the family, including the half-paralysed grandmother, to a shed which had been bought by Francis some months before he died. She set it up to make it habitable.
The Basilica is actually two churches one on top of the other. The foundation stone was laid and blessed on 11th June 1961 and the lower church was opened for worship in 1965. It can hold 700 people.

The great altarpiece (by Cafaro Rore) depicts the autumn walks from Turin to Don Bosco’s hill with the boys, Mamma Margaret, Saint Domenico Savio, Father Rua (his first successor) and Father Cagliero (first Salesian missionary). In the presbytery you will find the Caffaro Rore crucifix and the wood statue of Mary Help of Christians made by Müller (Ortisei) in 1936.
Behind the altar a precious relic of Don Bosco indicates the place where he was born. Than the paintings (by M. Bogani), on the left, represent the marriage of Margaret and Francis (the widower with his son Antonio) and the baptism of Giovannino; to the right, Francesco’s death and the transfer to the “Casetta”.
On the side altars there are the painting of St. Francis of Sales (Caffaro Rore) and the stained glass windows with the saints of the Salesian and Italian traditions. These contribute to highlighting the essential elements of Salesianity.
The electric traction organ, with 31 real logs and 2500 reeds, is made by Tamburini’s firm and the Last Supper, at the bottom of the church, is a life-size photograph of the famous work of Leonardo Da Vinci (by Ilford) 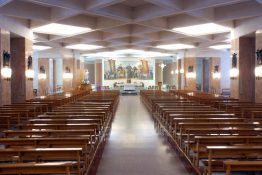 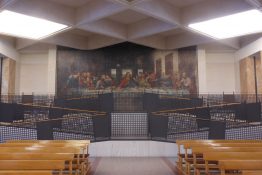 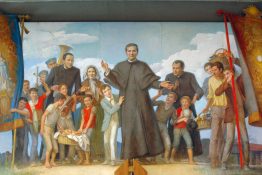